A game about hanging out with friends, having fun, and making soup. All you need is this game and the leftovers in your fridge.

Written for the Our Little Food jam.

I offer community copies for all my games. Just drop me a line if you're low on funds and would like a copy.

In order to download this game you must purchase it at or above the minimum price of 3.00€ EUR. You will get access to the following files:

It's really difficult to quantify, and for me that was a strong point in its favor, but in case you're scared off by the above terms, this is basically a party game for extremely casual dinners with friends, and you play by making stone soup.

Basically, gameplay involves setting a big stewpot of water on to boil, asking friends to bring over ingredients, and then rolling on random tables to see what ingredients you add to the soup.

There's also a sort of separate side-game to Secret Ingredients where some of the players have to sneak bouillon cubes into the pot, which is fun, but doesn't really connect to the rest of the game.

Secret Ingredients has some pretty necessary guardrails, and you can't add anything to the soup that anyone's allergic to---but it's probably worth asking your group straight out before play if there's any ingredient anyone wants to forbid for dietary/allergies/religious reasons, and then sharing that list of forbidden ingredients before folks go food shopping / raid their fridges for gaming supplies.

Overall, I think Secret Ingredients is an extremely rad concept. It randomly generates a soup and uses up a bunch of leftovers, which is neat and helpful if your fridge is too full---but you could also play this by having the host make a hotpot broth and then everyone bringing one ingredient of their choice, which would reduce the random element.

-The game has everyone bring stuff, but then the random tables explicitly define what kinds of foods can get added to the soup. If there's no onions, it's weird to have onions as a table entry. What about writing each ingredient down on a piece of paper and putting it in a hat, and only rolling on the tables for question prompts?

I like the idea of writing the ingredients down yourself. I'll use that for the next update! 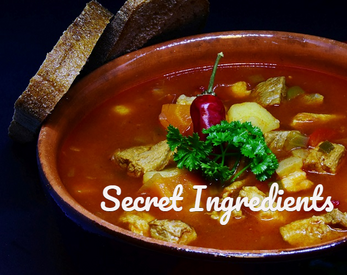